Chicago guitarist, Geordie Kelly, has been described as a first-class, gifted guitarist and composer (Vic Juris). He is a former student of Jimmy Bruno, and has been privileged to share the stage with artists such as Larry Coryell, Ed Calle, Bobby Shew, Phil DeGreg, Maureen McGovern, Frank Mantooth, Bob Bowman, Ritchie Cole, Little Anthony and the Imperials, The Virginia Symphony Orchestra, and The Turtle Island String Quartet. He was also a founding member and performer with the jazz combo "Skipjack Trio" in The United States Navy Band in Washington, D.C. He has performed extensively in North America, Europe, Asia, and in parts of Africa; 56 countries and counting.

Recognized internationally as a first-class jazz guitarist and composer, he became a Heritage Guitars Artist in 2001.

"Geordie Kelly has a quiet sound on the guitar and an introverted style that is subtle and sophisticated. On Triple Play, which was recorded in Virginia Beach, Virginia, he interacts with bassist Peter VenDeReit and drummer Christopher Koroshetz. The group performs six of Kelly’s intriguing originals, a version of “Doxy” that humorously alters a few of the melody notes, a rendition of “It Could Happen To You” that has an extension in each chorus, and a solo guitar showcase on “Beautiful Love.” While none of the musicians are household names, they are talented players, especially Geordie F.O. Kelly whose sound and style are a little reminiscent but not derivative of Jim Hall." - Scott Yanow

“Great writing, a beautiful guitar sound, a great time-feel and a great band. This is an incredible CD!" Bruce” - Bruce Saunders

“Geordie is a gifted guitarist and composer, first class all the way!" --- Vic Juris 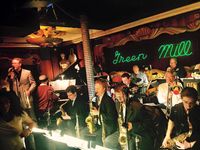